The Manaslu Circuit Trek is a 14 days Tea House trek with a combination of both Hindu and Buddhist culture along with the 8th highest peak of the world standing tall at 8156m. One can never get enough of the conspicuous scenery, wildlife, settlements and the trail accompanied by rhododendron, wildflowers, bridges, rivers and the magnificent mountains.

The spectacular view of the world eight highest mountain Manaslu makes the trek more enticing than anything else. The peak is the highest in the Gorkha district. Though this trek is not considered that difficult but both mental and physical preparation is expected. Many of the people may face altitude sickness along with muscle pain. The mountain long ridges and valley glaciers give entrance from all the regions. Nevertheless, we will be trekking from Soti Khola to Dharmashala and descend via Bimthang, Dharapani and to Kathmandu. Lying on the Great Himalayan Trail, Manaslu is gaining its popularity among trekkers in recent years. Manaslu is also known as the alternative to the Annapurna Circuit as it truly does justice if one wants to have an authentic experience in the Himalayas.

Mainly this region is inhabiting by Nurbi and Tsum. The branching off of the river at Chhikur divides these two ethnic domains. In the central hill the trekkers can observe the Gurung culture and closer to Tibet is Inhabitat by Bhutias. Most of the people are Buddhist out here.

The most adventurous yearly trail race head amidst the mountains in the Manaslu region. Most of the Runners from around the world gather in the Manaslu region every year to participate and enjoy the magnificent beauty accompanying them throughout the race. This trek can be planned any season throughout the year however, spring and autumn are more supportive in terms of weather, visibility and trail. Nevertheless, if you are looking for some other remote trekking routes in Nepal the upper Mustang Trek and Annapurna Circuit trek and Rara Lake trek are highly recommended.

Welcome to the land of biodiversity! We will have our team representative waiting for you at the airport upon your arrival. You will be guided to your hotel in a private vehicle. If your flight is in the morning, you can explore the area and even visit some sites in the day. Nevertheless, if your flight is in the evening, you will be directly invited for a welcome dinner at one of the best local restaurants. The cultural performance along with the Nepali cuisine will be an introduction for you. After our dinner, we held a meeting with your guide who will be with you the whole time about your trip. Nepali food, cultural music, and ethnic dance are the highlight of the day

8-9 hours of bus ride takes you to Soti Khola on the 2nd day of our trip. Moreover, if you don't want to go through the bus then you can hire a private vehicle with an agreement with the company. Our official trek starts from Soti Khola. Life outside the capital city Kathmandu is experienced along with bumpy roads, village settlements, green hills, seasonal crops and terrace farming.

On this day our official trek starts. Our trek to Maccha Khola starts once we are done with our breakfast. The trail is rocky which leads to the Gurung committee settlements. Passing from Lapubesi we walk north following the rocky trails along with various waterfalls and suspension bridges. Machha Khola is also famous for its hot spring bath. Overnight stay at a homestay. The glorious north view of Ganesh Himal can also be experienced.

Our fourth day of trek starts with a walk towards Jagat, the checkpoint for Manaslu entrance. After our breakfast at Machha Khola, we head toward another hot spring at Tatopani (which means hot water). To reach there we go through up hills, downhills and suspension bridges. We cross the Budhi Gandaki River and climb till we reach another bridge Dobhan. Passing the landslide region we trek towards the village of Jagat. Overnight in Jagat.On this day's best view of Ganesh hila from khoralbesu and shringi Himal from Jagat with a view of the organic coffee garden at Thorlabs.

We cross the suspension bridge and reach Salleri on 5th Day and entertain our eyes with a majestic view of Sirngi Himal. We then move downwards Sirdibas. Then again upstream towards the suspension bridge in Philim which rich in Gurung culture along with monasteries and viewpoint of Shringi Himal. Crossing the Millet fields on a fairly good trail, we reach Ekal Bhatti from the route turns steep. We head towards to the Deng River. Overnight in Deng. Influence of Buddhist culture, chortens and the prosperous Philim Village of Gurung people surrounded by the fields of maize, potato, and millet

From Deng we cross the suspension bridge and reach Lana. From here we climb uphill to join the trail that leads to Bih. The trail from here passes through the Sringhi Khola and the forests and mani as we turn towards the route to Ghap. Two routes lead us to Ghap. Thus, depending upon the situation, your team representative will lead the way to Namrung. The trail will follow through dense forests and rivers. After a few steep climbs we will finally reach Namrung. Overnight in Namrung.

After breakfast at Namrung, we set out for our destination today; Samagaun. Samagaun is a pure Lama settlement where you can get indulged in the Tibetan culture. From Namrung, passing the mani walls, we enter the rhododendron, fir and oak forest and reach Lihi. From Lihi, the trail moves towards Sho, crossing the bridge over Hinang River and reaching Lho. From here, we first hike up to Shyala village surrounded by mountains and glaciers. We cross the glacier-fed Numla Khola and hike up to the village of Samagaun. Overnight at Samagaun.

Acclimatization is important whenever a person is trekking at high altitude then he/she is used to. Thus, it is always good to acclimatize our bodies after reaching a certain height. While acclimatizing, we will be making our body active constantly by hiking to a nearby location or exploring the area so that our body gets used to the altitude. Today at Samagaun, we will be hiking to Birendra Lake to acclimatize as well as explore this area. We can also visit the Manaslu Base Camp or visit the Monasteries around the area. The day will be spent exploring the area.

After a day of acclimatization at Samagaun, we will head further for Samdu at 3690m. Following the Budhi Gandaki River, we come across the forest filled with birch, juniper, rhododendron, moss and lichen. Then enjoying the stone huts and long Mani walls of Kyonggma Kharka we cross a bridge over the Budhi Gandaki River and enter the village of Samdo. Samdo is a small settlement and the last one before Larkya La. This settlement is very close to Tibet and holds various trading fairs. The night will be spent at a lodge in Samdo

Before crossing Larkya La, we will come across Dharmashala also known as Larkya Phedi. The trail descends to the bridge over the Budhi Gandaki River. Crossing the last bridge across the Budhi Gandaki River, we progress towards Dharmasala. It is a seasonal village with a little shelter house that provides room for trekkers. The evening will be spent exploring the hills for acclimatization. The night will be spent at Dharmasala

Today is the big crossing of the Larkya La pass. Early in the morning, we have our breakfast, pack up and start walking to ignore the afternoon gaze. We will walk across the moraine, the lakes which will be frozen in winter and steep uphill to Larkya La, welcoming us with prayer flags and Manis. The magnificent views of the snow-capped peaks are breathtaking and truly a memorable one. After a steep descent from the pass, we now trek west on a high moraine ridge of Salpudanda Glacier on our right. The trail now descends towards the grassy moraine of Dangboche Kharka. The track follows the east bank of the large lateral moraine, descends to the beautiful village of Bimthang. Overnight at a lodge in Bimthang.

On the 12th day, we will start descending. Today, we will cover our trek from Bimthang to Dharapani. The trail follows the Bimthang glacier and heads south entering the forest of rhododendron and pine, passes Sangure Kharka and continues till the cultivated land of Kharche. From Karche, the trail follows the west bank of the Dudh Khola, heads towards Tilije. We will cross the viewpoint of Manaslu and enter the valley of Gho. We now cross the bridge over the Dudh Khola and walk south for about an hour to reach Dharapani. The night will be spent at a lodge in Dharapani

On the last day of the trek, we will descend from Dharapani to Kathmandu on a local bus. You can also book a private vehicle upon request and an extra charge to travel from Dharapani to Kathmandu. The bus will move towards Bahundadha, Besisahar, Dumre and finally Kathmandu. Upon reaching Kathmandu, you will be escorted to your hotel where you can freshen up and rest. In the evening, we will host a farewell dinner for you where we can reminiscence the memory and also gain your feedback.

Today is your last day in Nepal. If your flight leaves early we will drop you off at the airport. If you have time, you can stroll around and buy souvenirs for your friends and family back home. Namaste and have a safe flight!

Trekking in the Himalayas requires equipment and footwear according to the season and the location. A single trek can start in the warm and humid climate in the lowlands, and bring you to passes above 5,000m. Solid trainers (“sneakers”) are adequate on most trails but bring sturdy boots for crossing passes that may be covered with snow. Climbing expeditions requires special equipment. Sandals and flip-flops are practical for an evening in lodges or camp. You can buy any kind of footwear in Nepal.   No, it is not possible to live off the land in Nepal. You cannot just set off into the woods with a little money, a basket and a fishing rod and expect to manage on your own, Not only is the vegetation where there are fruit, wild herbs and other wild edibles limited, private community-owned, but fish is sparse and hunting is forbidden. It can also be difficult to buy food locally due to scarcity and poverty.

There are no reviews yet. Be the first one to write one. 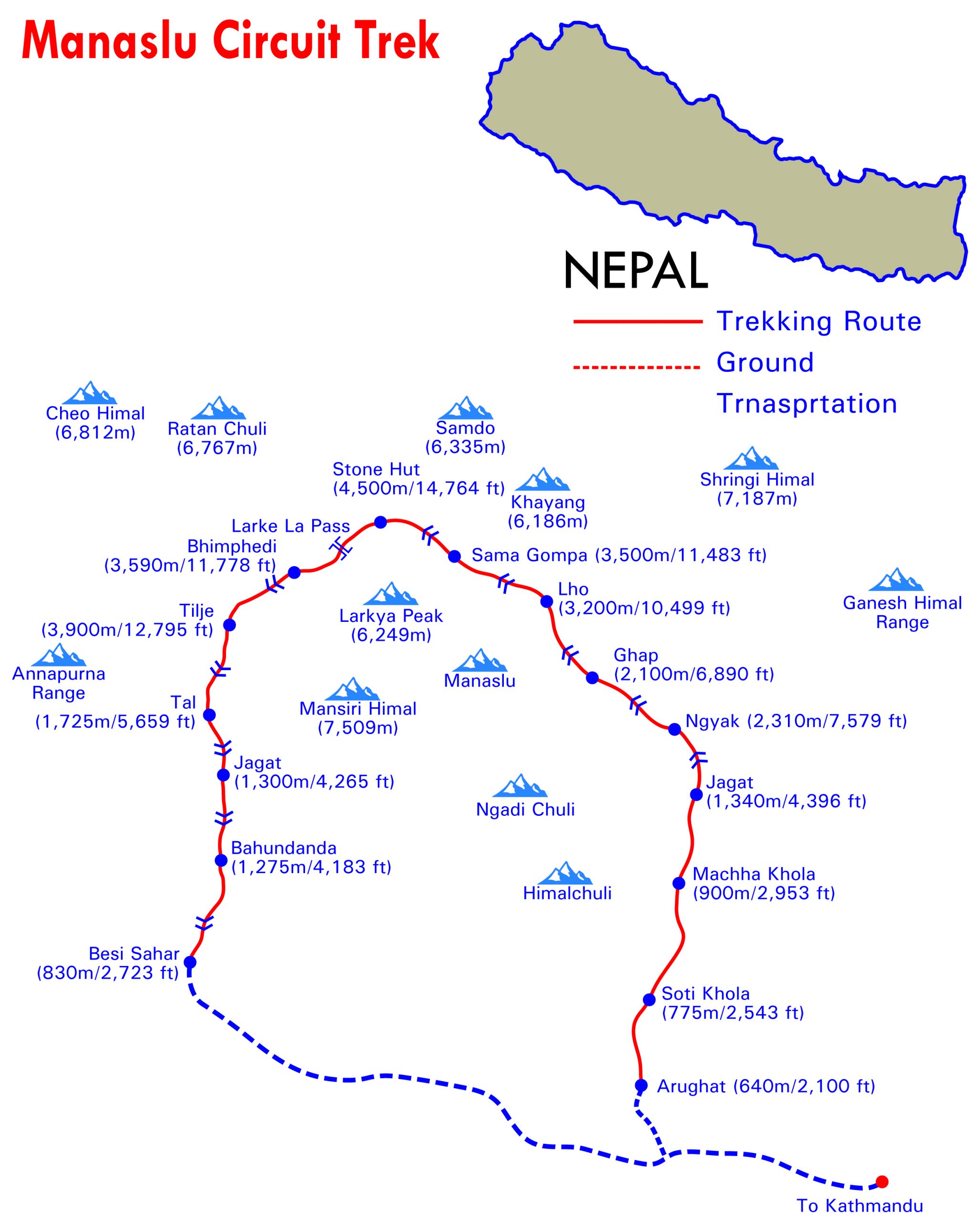